Seven Myths and Realities about Food Trucks: Why the Facts Support Food-Truck Freedom 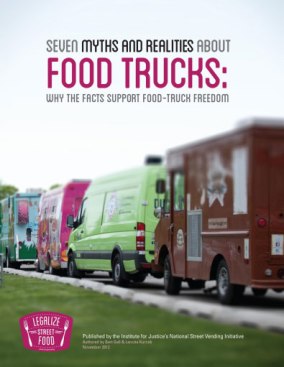 Food trucks continue to grow in popularity throughout the country. But as the Institute for Justice detailed in a recent report, some cities have responded by enacting and enforcing laws that do not advance public health and safety, and serve no other purpose than to “protect” restaurants from competition from food trucks. Arguing in favor of these laws—such as those that bar food trucks from operating in popular commercial areas or that prohibit food trucks from parking within several hundred feet of any restaurant—their proponents rely upon several myths.

Bert Gall & Lancée Kurcab list the seven most prevalent of these myths and, using facts and real-world examples, debunk them.
Read Seven Myths and Realities about Food Trucks: Why the Facts Support Food-Truck Freedom

“In a free-market system, there really are no “unfair” advantages between business models because all are free to be used by anyone. Even if a food truck’s mobility could create an “unfair” advantage over restaurants, the many disadvantages swamp that one small advantage.”

Should the city of Chicago be in the business of protecting a few politically connected restaurateurs from competition?

That is the question to be answered by a major lawsuit filed Wednesday, November 14, 2012, in Cook County Circuit Court by the Institute for Justice (IJ)—a national public interest law firm—and three Chicago-area food truck entrepreneurs.

Cities nationwide are experiencing the benefits of food trucks. But for years Chicago had not embraced that movement. For example, Chicago did not allow cooking on food trucks and it told food truck entrepreneurs that they must stay more than 200 feet from brick-and-mortar restaurants. So in June 2012, when the city announced it would be revising its vending laws, food fans were excited.

The law that passed in July, however, continues to make it illegal for food trucks to operate within 200 feet of any fixed business that serves food. The fines for violating the 200-foot rule are up to $2,000—ten times higher than for parking in front of a fire hydrant. Further, the city is forcing food trucks to install GPS tracking devices that broadcast the trucks’ every move. According to the Chicago Tribune, “the ordinance doesn’t serve the needs of the lunch-seeking public. It benefits the brick-and-mortar eateries, whose owners don’t want the competition.” 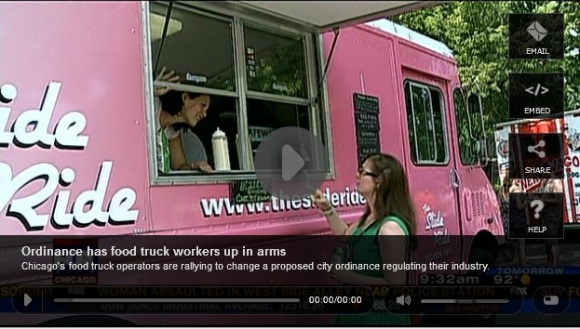